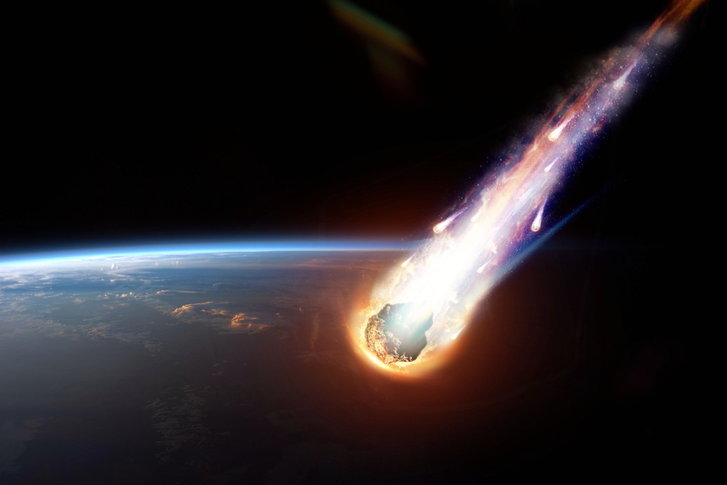 Meteorite (Meteorite) is a space rock that has already fallen to the Earth's surface or the planet's surface. when in space is called Asteroids (Asteroid) or meteors (Meteoriod) when entering the Earth's atmosphere moving at a high speed of about 40-70 km/s, compression occurs with the air in the Earth's atmosphere. make the air around Burning into a light called a meteor (Meteor) until it hits the ground and then called a meteorite. A small meteorite is an almost completely burnt space rock. But for large meteorites are space rocks that are not completely burned down and fall to the earth and create craters.

Meteorites can be divided into 3 types:
C-type carbon meteorites are dark in color. contains carbon
S-type rock meteorites are composed of silica.
M-type metal meteorites are composed of iron and nickel.
In addition to meteorites formed by asteroid flakes. There are also terrestrial meteorites coming from the Moon and Mars. This happens when a large asteroid hit the Martian moon. The explosion would cause the meteor to fly into space, freeing it from gravity and flying into space. When the world orbits through Earth's gravity will attract the meteor to fall. And if the meteorite falls on a white surface like a sheet of ice? Scientists are easy to follow.

Suspicious Meteorite Testing Process
Part 1 Determining the Characteristics of Suspicious Objects
Notice the shape of the object. The shape of most meteorites is asymmetrical. Because as the object moves through the atmosphere, it will be very hot. As a result, the shape of the meteorite changed. from a spherical or nearly round shape become asymmetrical
Observe from the outer skin color of the object. The surface of a meteorite that has just landed on Earth is pitch black. But if it is a meteorite that has been on the earth for a long time will turn brown which is the color formed by rust
Observed from the appearance of the outer skin Meteorite skin texture In particular, rock meteorites are uniquely different from other rocks in that they have a "fusion crust", a thin, shiny black crust formed by burning in the atmosphere. and often have a darker color than common stones Iron meteorites are dark black with regmaglypt marks, similar to the thumbprints we press on clay lumps.
The suspect object must be non-porous. or bubbles are strictly inside Because all types of meteorites form in space. In an environment it is impossible for meteorites to form and become porous. If porous lumps are found, it may be metal slag from industrial processes. Or it may be some type of rock found on the earth, such as scoria rock (Scoria) is a volcanic rock. It is lightweight and can float on water.